Classical Tour Of Greece in 7 Days

Today you will arrive in Athens. You will check in at your hotel, located next to the Acropolis new Museum in the Plaka area. Afternoon at leisure. You can relax for a while and then go for a stroll around the old village of Plaka or go shopping in Hermou street. Full of new images of the capital of Greece, you will spend your first overnight in Athens.

After breakfast at 09:30 you will go on a 3 hours walking tour of Athens.

You will visit the Temple of Olympian Zeus, Hadrian’s Arch and the old Plaka district. You will continue with a visit of the Acropolis, the Temple of Nike, the Parthenon and the Propylea.

From the Acropolis hill you will have a breathtaking view of the surroundings, including the Agora, the Observatory, the Democracy hill ( Pnyx ), the Philopappos Hill and the Mars Hill.You will also admire the theater of Dionysos and the Odeon of Erodes Atticus where the ancient Greek drama was first staged.

The guided tour will end on the hill of the Acropolis. The estimated walking distance is 1500 meters. You will have the afternoon at leisure to visit Athens on your own, to visit the new Acropolis Museum and for shopping. You will spend your second night in Athens.

Starting at 08:30 from Athens, you will be driven westwards along the scenic coast, until you will reach the Corinth Canal where you will have a short stop. You will continue your Classical Tour of Greece along the coastal road of the Saronic Gulf towards the famous Epidaurus Theatre, Nauplion and Mycenae.

The theatre of the ancient city is quite well-preserved, in the shape it acquired during the latter years of its function. It is marveled for its exceptional acoustics, which permit almost perfect intelligibility of unamplified spoken word from the scene to all 12,000 spectators, regardless their seating.

Then you will depart for Nauplion, the 1st capital of Greece in 1829 where you will have a short stop. Afterwards you will be driven to Mycenae. Mycenae, the kingdom of the mythical king Agamemnon, first sung by Homer in his epical poems, is the most important and richest ancient Greek palace.

Its name was given to one of the greatest civilizations of Greek prehistory, the Mycenaean civilization. In the afternoon you will depart for Olympia where you will be served dinner and you will spend the night. 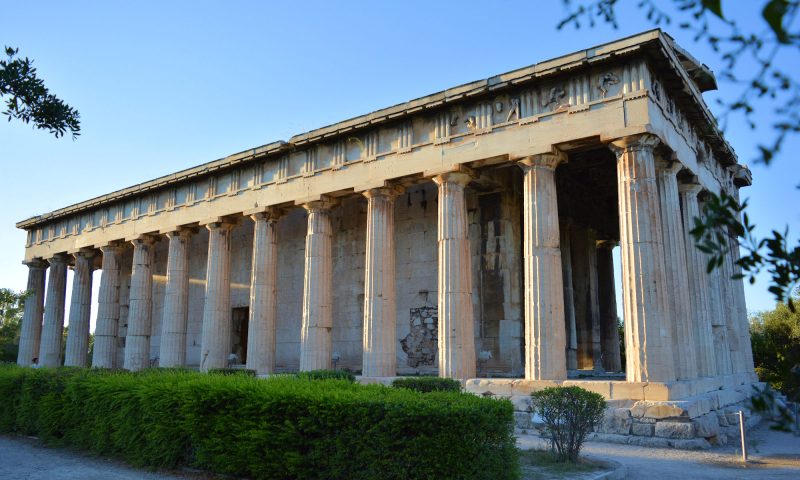 Olympia ,the most celebrated sanctuary of ancient Greece, dedicated to Zeus, the father of the gods, sprawls over the southwest foot of Mount Cronios, at the confluence of the Alpheios and the Kladeos rivers, in a lush, green landscape.

Although secluded near the west coast of Peloponnese, Olympia became the most important religious and athletic centre in Greece. Its fame rests upon the Olympic Games, the greatest national festival and a highly prestigious one world-wide, which was held every four years to honor Zeus.

You will visit the Archaeological Site and the Museum then you will be driven via Patras to Rion to cross the channel to Antirrion on the “State of the Art” new suspended bridge considered to be the longest and most modern one in Europe. Afterwards you will pass through Naupactus and you will continue your journey to Delphi where you will have dinner and spend the night.

Situated at the foot of Mount Parnassos, the Pan-Hellenic sanctuary of Delphi which had the most famous oracle of ancient Greece lies here. Delphi was regarded to be the centre-the belly button of the world.

The sanctuary of Delphi, set within the most spectacular landscape, was for many centuries the cultural and religious centre and symbol of unity for the Hellenic world and seat of the Pythian Games, the second most important games in Greece after the Olympics, which were held every four years.

Visit of the archaeological site and the Museum where you can see among other archeological treasures, the unique bronze statue of the Charioteer dedicated to Apollo by Polyzalos, the tyrant of Gela, in 478 B.C. when he won the chariot-race at the Pythian Games.

After completing your visit, you will depart for Kalambaka where you will have a short visit of the village upon arrival. Dinner will be served and then you will spend your overnight in this amazing place.

Today you will see one of the most amazing places in Greece, the Meteora. Meteora means ‘suspended in the air’ in Greek and this name soon came to encompass the entire rock community of 24 monasteries, the biggest and most important group of monasteries in Greece after those on Mount Athos.

As there were no steps leading to the monasteries, the main access was by means of a net that was hitched over a hook, hoisted up by rope and a hand cranked windlass to winch towers overhanging the chasm.

Monks used to descend in the nets or on retractable wooden ladders up to 40m long to the fertile valleys below to grow grapes, corn and potatoes. Each community developed its own resources and by the end of the 14th century, the Grand Meteoron emerged as the dominant community.

The rock monasteries have been characterized by UNESCO as a unique phenomenon of cultural heritage.

After the visit, you will start the drive back to Athens passing through Thermopylae where you will have a photo stop in front of the Monument of King Leonidas who fought against the Persians and died along with his 300 men from Sparta. You will return to Athens at around 19:00 where you will spend your last night in Greece.

After breakfast, end of your 7-Day Classical Tour of Greece, a journey through the ancient and medieval legends of this great country. We will be glad to reveal to you more secret places of this land on your next trip.

Other Cruises in Greece

a vacation at Loutraki Thermal Spa or in a Tour visiting Europe like The Ancient world Tour ( visiting Rome, Vatican, Athens). Visit Zeus.Guide, the Cultural Greek Travel Guide, sponsored by Vikings Navita, to see more about Patmos or you wnat from our home page to select another destination.