Cultural Tours of Greece. “The 14-day Magnificent Greece tour”, a Classical Monuments Tour of Greece plus a 7-days Yacht Cruise

Scour Greece by land and sea with our Cultural Tours of Greece. With this unique, best-selling tour package, “The 14-day Magnificent Greece Tour” you will visit some of the best sights the country has to offer.

Your trip begins with an exploration of historic Athens, a city that combines past and present for a truly unique experience. Along your tour and discovery through Greece’s capital, you will be treated to the history of the city and breathtaking monuments including the Acropolis, Parthenon, Olympia, site of the first Olympic Stadium and much more.

This city combines elements of a rich past with a modern culture, blending together to make for an experience that you won’t soon forget.

After your voyage through Athens, embark upon the Aegean Sea toward the islands of the Cyclades for your Greek Islands Cruise. Reaching the shores of each island will present you with a variety of sights to behold.

Each island has a rich history and offers a variety of sights, sounds, and experiences to indulge in. Ashore at Delphi you will bear witness to an ancient sanctuary with a rich mythology and history. Poliegos offers stunning beaches for you to relax and rejuvenate. The island of Delos provides you access to one of the most wondrous archaeological sites known to man.

Along the way you will be treated to culture, history, sites, and sounds aboard each island you visit. Come with us on a spanning tour of beautiful Greece.

The Cultural Tours of Greece Best Seller! Athens, 4 day coach tour and a 7 day Greek Islands cruise by Yacht A perfect trip, combing Athens with a land tour to the ancient Greek archaeological sites and a week’s cruise in the blue Aegean Sea, visiting the famous and also some less known islands in the Cyclades on yacht m/s GALILEO.

Day 1 (Sat) Arrive in Athens International Airport Venizelos. Meeting and transfer by taxi to your Hotel Herodion in Athens, located next to the Akropolis, in the Plaka area.

Afternoon at leisure. Overnight in Athens.

The striking contrast between breathtaking monuments of a glorious past and modern elegant structures is what you will enjoy during your tour of Athens.

Visit the Acropolis,the crowning beauty and glory of Ancient Athens, with its many monuments atop its rocky base, including the awesome Parthenon, the Propylea, the temple of Athena Nike and the Erechtheion, with its Porch of Maidens.

Drive to the Roman Temple of Olympic Zeus, the Panathinaikon Stadium (site of the first modern Olympic Games in 1896), the Tomb of the unknown Soldier in front of the Parliament House on Constitution Square. See views of government buildings and elegant structures of the 19th century.

In contrast, conclude your tour with a visit to the new Acropolis museum, a marvel of architecture with a full exhibition of the glory of Ancient Athens. Overnight in Athens. 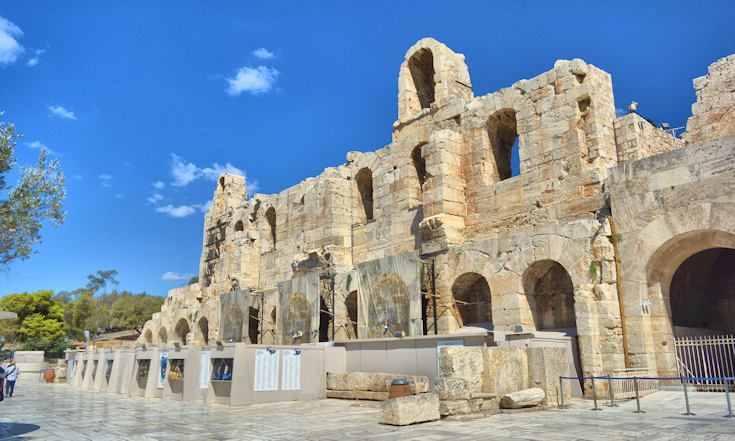 Day 3 (Mon) Starting from Athens at 08:00 for the 4-day classical tour by coach. We drive westwards along the scenic coast, until we reach the Corinth Canal with its breathtaking views (Short Stop). The Corinth Canal is a junction of international sea transport and serves ships coming from the western Mediterranean and Adriatic en route to eastern Mediterranean and black sea ports and vice-versa.

Continue along the coastal road of the Saronic Gulf to visit the Epidaurus Theater and the archaeological site.

Then continue to Nauplion, the first capital of Greece in 1829 (Short Stop) and drive to Mycenae (Visit) “Mycenae ‘Rich in Gold’, the kingdom of mythical Agamemnon, first sung by Homer in his epics, is the most important and richest palatial centre of the Late Bronze Age in Greece. Its name was given to one of the greatest civilizations of Greek prehistory, the Mycenaean civilization.”

In the afternoon depart for the beautiful Olympia – Dinner & overnight in Olympia. 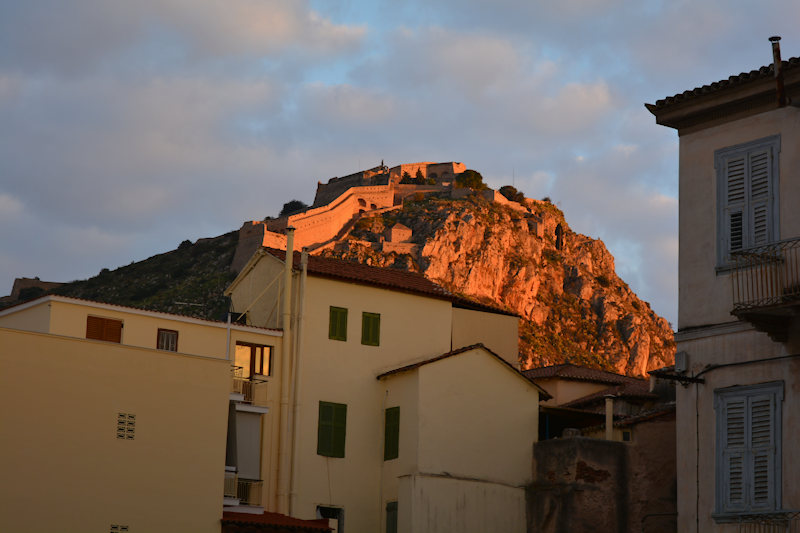 Day 4 (Tue) Olympia the most celebrated sanctuary of ancient Greece, Dedicated to Zeus, the father of the gods, it sprawls over the southwest foot of Mount Kronios, at the confluence of the Alpheios and the Kladeos rivers, in a lush, green landscape. Although secluded near the west coast of the Peloponnese, Olympia became the most important religious and athletic centre in Greece.

Its fame rests upon the Olympic Games, the greatest national festival and a highly prestigious one world-wide, which was held every four years to honor Zeus. Visit the Archaeological Site & the Museum and then drive via Patras to Rion, across the channel to Antirion on the “State of the Art” new suspended bridge considered to be the longest and most modern in Europe.

Arrive in Naupaktos then continue to Delphi – Dinner and overnight in Delphi.

Day 5 (Wed) Situated at the foot of Mount Parnassos, within the angle formed by the twin rocks of the Phaedriades, lies the Pan-Hellenic sanctuary of Delphi, which had the most famous oracle of ancient Greece. Delphi was regarded as the centre of the world.

According to mythology, it is here that the two eagles sent out by Zeus from the ends of the universe to find the navel of the world met.

The sanctuary of Delphi, set within a most spectacular landscape, was for many centuries the cultural and religious centre and symbol of unity for the Hellenic world and seat of the Pythian Games, the second most important games in Greece after the Olympics, which were held every four years.

Visit of the archaeological site and the Museum where one can see among other archeological treasures, the unique bronze statue of the Charioteer dedicated to Apollo by Polyzalos, the tyrant of Gela, in 478 B.C. when he won the chariot-race at the Pythian Games. This incomparable statue is a representative example of the ”severe” Attic style, certainly the work of a major artist.

After visits depart for Kalambaka through Amphissa – Lamia & Trikala– Dinner & Overnight in Kalambaka.

Day 6 (Thu) Today we will see one of the most amazing places in Greece – Meteora -Meaning ‘suspended in air’ the name Meteora soon came to encompass the entire rock community of 24 monasteries, the biggest and most important group of monasteries in Greece after those in Mount Athos.

There were no steps and the main access to the monasteries was by means of a net that was hitched over a hook and hoisted up by rope and a hand cranked windlass to winch towers overhanging the chasm.

Monks descended in the nets or on retractable wooden ladders up to 40m long to the fertile valleys below to grow grapes, corn and potatoes. Each community developed its own resources and by the end of the 14th century, the Grand Meteoron emerged as the dominant community.

The rock monasteries have been characterized by UNESCO as a unique phenomenon of cultural heritage. 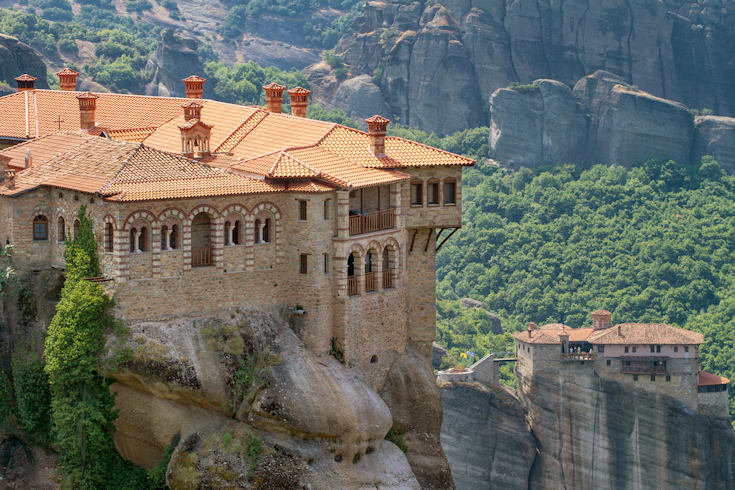 After visits start the drive back to Athens passing through Thermoplylae (Photo Stop) & Kammena Vourla. Arrive in Athens in the late afternoon at 19:00. Transfer to Hotel Herodion. Overnight.

Day 7 (Fri) Morning at leisure. At 13:00 transfer to Piraeus Yacht Harbor Marina Zea to start the 7-Day Greek Islands Cruise to the Cyclades islands aboard the yacht GALILEO.

Embarkation. Enjoy a welcome drink and meet your crew and fellow passengers. Sail for Poros for a short 3 hours visit, before set sail to Poliegos.

Day 8 (Sat) Morning arrival in Poliegos, a very small island known for its amazing beaches. Morning swim stop followed by a BBQ on deck. Afternoon sailing to Folegandros, one of the most amazing and less known islands in the Aegean Sea. Walk the amazing Upper city and dine at one of the traditional Greek tavernas.

Day 9 (Sun) Morning arrival at Santorini (occasionally at anchor) to explore its unique capital Fira. Optional Excursion to a typical Winery and a tour of the villages.

Day 10 (Mon) In the morning you will enjoy a swim stop in an enchanting bay of Antiparos . Early noon arrival in Paros. Visit Parikia and the quaint village of Naoussa. Time to have a fun night and show us your dancing skills during our famous Greek Night. Overnight in Paros. 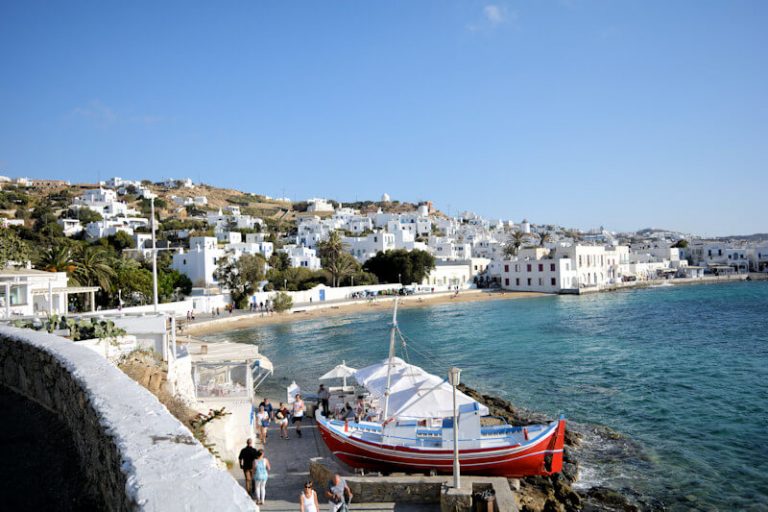 Day 11 ( Tue) Optional morning tour to the unique archaeological site of Delos, antiquity’s most sacred island. Later on, we stop at one of Mykonos beautiful bays for swimming off the ship before sailing into the port of Mykonos. The island of the jet setters is yours to explore and the night is young. Overnight in Mykonos.

Day 12 (Wed) After a morning swim we will arrive in Syros, the capital of the Cycladic islands where you can enjoy one of its beautiful sandy beaches or walk through town and enjoy the unique architecture of the buildings. Overnight in Syros.

Day 13 (Thu) In the morning we will arrive in Kythnos where you will enjoy a swim in Kolones bay and will then set sail for Marina Zea where we will arrive in the late afternoon via Cape Sounion, where the temple of Poseidon is located. Overnight in Marina Zea/ Piraeus.

Day 14 ( Fri) Disembarkation after breakfast at 08:30. Transfer to Athens or Athens International Airport. End of Cultural Tour of Greece.

a Private Tour of Greece  , the 7-day Zorba Tour of Crete or a Cabin Charter Cruise in the Ionian or the Sporades Islands.