The Oracle of Delphi on Google Maps

Delphi is undeniably a pre-eminent destination for visitors to Greece. It is located on Mount Parnassus, about 2 ½ hour’s drive from Athens, the capital of the country. Delphi holds the distinction of being called the navel of the world by the ancient Greeks, and is the place where Apollo foresaw things to come.

The Oracle of Delphi (the whole Archaeological Site of Delphi) is registered on UNESCO World Heritage List.

The place upon which the oracle was built seems somehow to have its own energy, which I think many people perceive while visiting this astonishing site. The altitude, the view, the amphitheatric landscape with its multiple levels upon which has been built, the buildings and the Kastaleia fountain compose entirely something gorgeous, yet slightly eerie.

The Oracle of Delphi and the Pythia

When I visit this ancient sacred place, I really like to pass first from the Kastaleia Fountain, where Pythia, the priests and the faithful had to bathe in order to purify themselves before receiving divination.

Pythia was the highest priestess who spoke to Apollo, giving the priests the god’s word that they, in their turn would interpret. 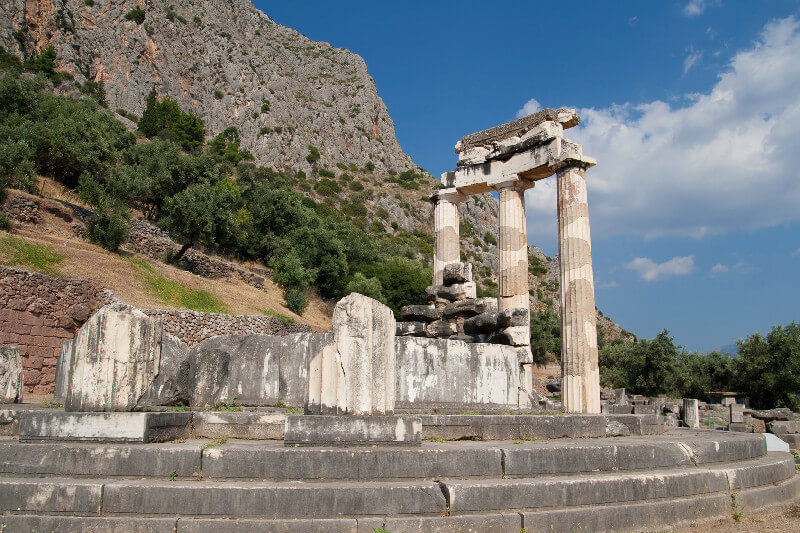 The legend says that there was the nest of the huge serpent Python, that god Apollo killed. It was then that began the worship of the new god.

The Pythian Games (called Pythia in Greek), after all, the biggest festival of Delphi (and the second largest in Greece after the Olympics) with musical and athletic competitions, symbolized exactly that: the killing of Python snake.

The Sacred Way that leads to the temple of Apollo and the altar of the Chians evokes the rituals during which people asked the oracle’s divination. Those who required guidance climbed the Sacred Way the ninth day of each month. They would make a sacrifice and enter into a waiting list for the asked divination.

I must admit that the theatre of Delphi is for me by its own magic. Among the over seventy ancient Greek theaters that have survived to our age, this is one of my favorites. Here, the musical competitions took place during the Pythian Games and other festivities as well.

It will be a great source of joy for lovers of ancient theaters to attend performances in this mystical land.

The Temple of Apollo probably had the most important role here. According to mythology, the first temple was built by laurel branches, the second of beeswax and feathers, the third was made of copper and finally the fourth was built by the same god Apollo together with two legendary architects. The remains of the temple show clearly that it was particularly evocative, a fact enhanced by the Doric rhythm of the building.

I am sure that you will find your way to the rest of the site’s attractions, such as the Treasury of the Athenians, theTreasury of the Siphnians, the Gymnasiumand the Museum. In Greece it is not only important to “see” using our own eyes, but it is imperative to “see” through our “inner” receptors as well.

Finally, I must confess that I love to drink a cup of coffee or a soft drink in the small café located near the Kastaleia (located on the other side of the road). Especially when it is not crowded, looking at the view calms my heart and takes me walking in ancient streets. It is easy to perceive that there are roads that lead from the past to the present.

How to arrive at Delphi

There are several ways you can visit the archaeological site and the village of Delphi. Perhaps the best thing if you do not want to drive is to take a guided day tour with Chat Tours or Key Tours. They both organize a guided tour of the area.

If you prefer to go on your own, you can rent a car, take a private tour to Delphi or take the intercity bus to Delphi.

a vacation at Loutraki Thermal Spa or  to see the 7-Days Classical Tour of Greece -visiting Delphi too. 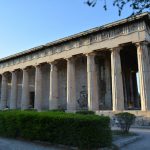 Study tours in Greece. A life changing experience.blog, educational tours
A cruise to the greek islands plus a couple of days in Athensblog