If you’re planning to visit mystical Delos Island, you will discover that it’s an archaeological gem and is part of UNESCO’s World Heritage List .

Located in the center of the Cyclades Islands in the Aegean Sea, Delos Island  is a small, rocky island very close to cosmopolitan Mykonos. However, it is far from a busting city, nice restaurants and picturesque little white houses that are typical in the Cyclades.

When you step foot in Delos, you are transformed, taken back in time. It will absorb your mind filling your with knowledge and wonder of a world long passed. Here you are enraptured by the surroundings: a blue sea, picturesque rocky ground and ancient ruins. 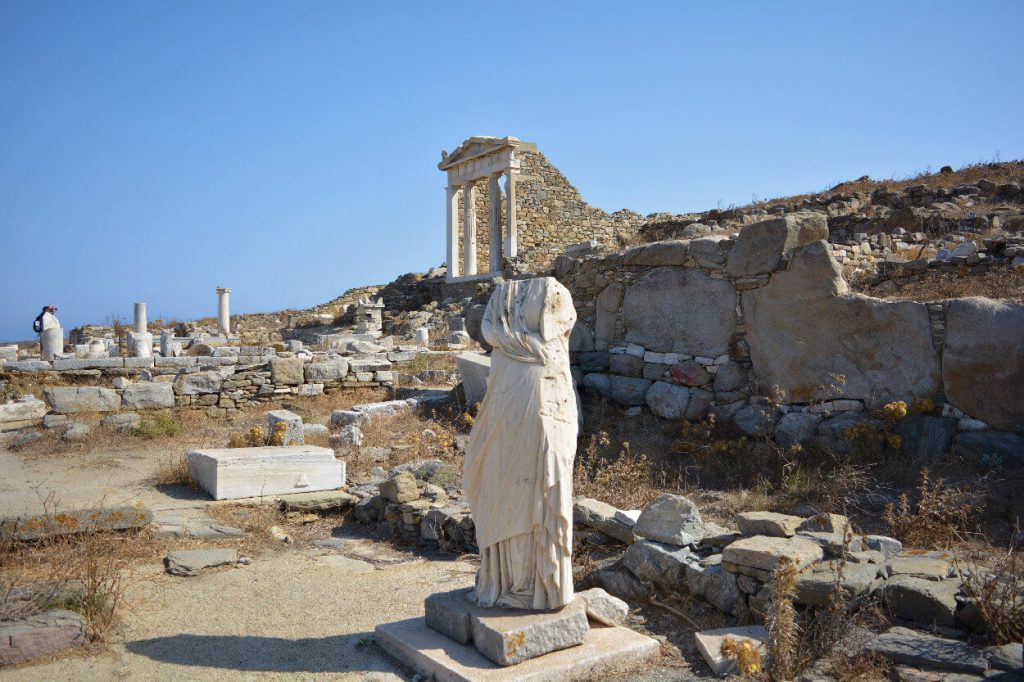 According to Greek Mythology, mystical Delos Island was the birthplace of the gods Apollo and Artemis. They were two famous siblings. Apollo was the god of light, balance and harmony while his twin sister was the moon-goddess. Their mother Leto, pregnant by Zeus, escaped to Delos to give birth to the two children and escape Hera’s wrath (she was god Zeus wife, very well known for her bad temper).

The island was inhabited since the Bronze Age and later on became a central point of religious significance in the ancient Greek world. After the Persian wars, it gained even more importance, as it was the center of the Delian League.

A great feast was celebrated every four years in the island and it was a great event in the ancient Mediterranean world. Competitions in music and theater took place along with banquets, gymnastic games and dances.

Delos Island was dedicated, as Delphi’s oracle, to Apollo whose cult was very strong.

Walking along the ancient stone path that leads to Mount Kynthos is something you won’t forget. The surroundings, breathtaking view, calmness of the landscape and whistle of the wind will awe you. You may even hear, coming from a time long ago a people talking in ancient tongues.

The island is full of sanctuaries and must-visit places. Visit mystical Delos Island and discover The sanctuary to Apollo, The Terrace of the Sanctuaries of the Foreign Gods, the Sanctuary of Dionysus, The House of the Dolphins and the House with the Masks (with its fantastic mosaic floors), the Theater, the House of the Trident, the House of Cleopatra are all just some suggestions.

On your adventures you will need to prepare yourself: Bring a good pair of shoes, sunglasses and a very shady hat since sun during summer time is very strong in Greece. Also, don’t forget to pack your camera and if you draw, may we suggest paper and charcoal because you’ll surely be inspired. Apollo’s spirit still resides in the air on the island which creates an amazing inner experience.

May we suggest you combine a trip to both Mykonos and Delos. There are many hotels in Mykonos Island where you can find every amenity you need and from Mykonos you can take a day excursion and visit mystical Delos Island ! In Tourlos bay, the Rhenia Hotel is a great value. A beautiful hotel situated within walking distance from downtown.

Another mesmerizing adventure you can take is to visit the islands of the Cyclades by a wonderful yacht cruise in the Greek Islands . You can lower the total cost of your trip if you buy your airline tickets early! Also be sure to watch out for any special deals on Greek cruises!

Don’t wait; Delos Island, Artemis and Apollo are there, in the Cyclades calling for you. 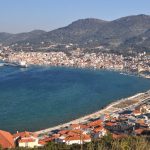