There is no denying that the historic country of Greece, a country surrounded by clear blue waters and remembered with a history that takes its start as one of the ancient world’s greatest civilizations, has plenty to offer to all who come here.

Greek food is very tasty!  From the views to the culture to even the local life, this nation has had its own fair share in the world of cuisine as well, often characterized by its particular use of olive oil and sweet spices in plenty of its dishes. A country that has made itself known to the world since ancient times can only offer a huge array of meals and desserts and even drinks that both its locals and its guests can truly enjoy.

Most of the dishes served in Greece are particularly tasty, so why not give Greek cuisine a go?

To start, here are some of the various dishes of Greek food you can enjoy while you’re in Greece:

If you have ever had a Greek salad, then this particular side dish or appetizer depending on how they are served is not as foreign as you think. If you have never had a Greek salad though, you ought to know that these are rice parcels wrapped in grape leaves and often spiced up with either mincemeat or a conglomeration of spices like thyme, oregano and so much more, depending on where in Greece you are enjoying this.

vegetables cooked in the oven, called “briam” in Greece

Ah, the so-called Greek lasagne. For those who are itching for something more Mediterranean than totally Greek, this layered potatoes and eggplants slices dish is for you. Mousaka is a combination of either beef or lamb meat, tomato sauce, vegetables and béchamel, this hearty casserole dish is a whole package full of  calories, so you might want to stay away from desserts if you want to really enjoy this one.
|

Who does not love cheese? Greece has a whole lot of fresh cheeses and to offer, and this dairy delight is the dish that does Greek cheeses justice. Cooked in a traditional Greek pan called a sagani, this name is actually given to all dishes cooked in this kind of pan. One of the most tasteful and popular dishes out of this pan is the shrimp saganaki which consists of shrimp, tomatoes, garlic, onions and feta and which is also a healthier option over plain saganaki which is merely fried cheese.

Remember how Greece is not really all for fast-food? Well, this dish is its only exception. Grilled meat skewers served either on a platter or as a sandwich with veggies, pita and yogurt sauce on the side, this is a whole level up from the typical barbecue. It is tasty and hearty all at once. Souvlaki, What a treat! 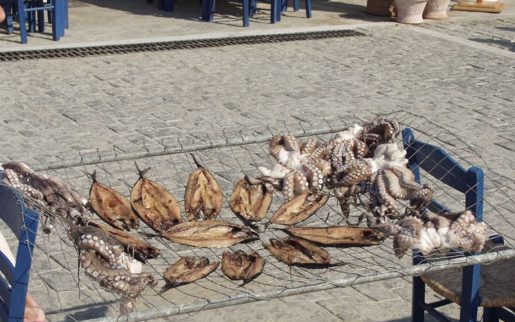 Done sampling all Greek dishes and now in the mood for a little alcohol? Greece is famous for ouzo, a classic anise-flavoured aperitif usually mixed with water or ice and served with mezedes, the term for Greek appetizers that usually come before the meal or just served alone. Because of its high sugar content and overall alcohol content by volume, this drink is best enjoyed after eating something. Adding water or ice to ouzo will change its color to white. “Geia mas!” as they say in Greece, meaning “cheers!”. 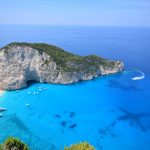