Mykonos is known around the world for being the wild party and night life capital of the Mediterranean Greek Isles. It is one of Greece’s most visited places by tourists from all over the world. But there’s life after Mykonos, if there’s still some life in you… after Mykonos.

Cosmopolitan Paros and elegant Siphnos are not far. If you combine your visit to Mykonos with these two amazing gems, you’ll have a great balance of what Greece is really about – and the time of your life as well, of course. You’ll have a touch of the island life, a touch of natural atmosphere, the classical architecture and enough fun to make you want to come back again.

Start with Mykonos, the world famous island for partying, bars and dance clubs. The whole island is set up for having fun, whether is on one of the incredible beach bars or in Mykonos Town’s dance clubs and bars.

I like Paradise and Super Paradise between many fantastic sandy beaches the Island has to offer, but Elia beach is my favorite one. 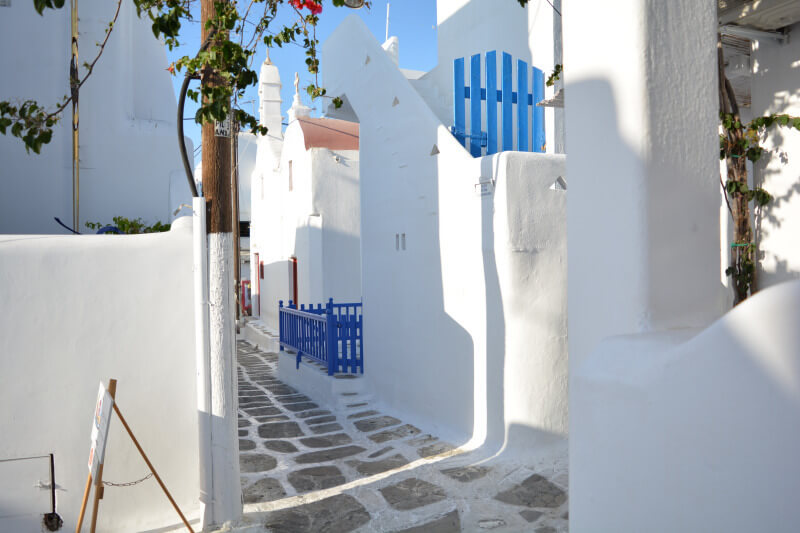 Mykonos Island with its beatiful alleys

Down-town Mykonos is an amazing place. A cocktail or even a soft drink in Mykonos’ “Venice” with the white windmills standing just behind you is something you won’t forget. During sunset it’s even more dramatic. You can find international and local cuisine on the Island. If you go for the local food (to be honest, I love good Greek food), order a Greek salad, a moussaka or kokkinisto(beef with tomato sauce, pepper, cinnamon and other spices).

If you love fish, taste fried “barbounia” or a “tsipoura”. Don’t miss the octopus with vinegar. I can never say no to a glass or two of the preferred beverage of the locals, Ouzo (it’s an anise flavored aperitif). Strong (40% vol.), tasty and colorless and will turn white when you add some ice or water.

I usually order “Ouzo 12” or “Ouzo Plomari”. They’re both magnificent.

In Greece, and especially in Cyclades Islands during summer, a thing you will certainly notice is the night sky. There are millions of shining stars against the deep blue-black sky. You’ll really be amazed by that. During July and August there are many falling stars, so it’s a good time to make all your wishes come true! 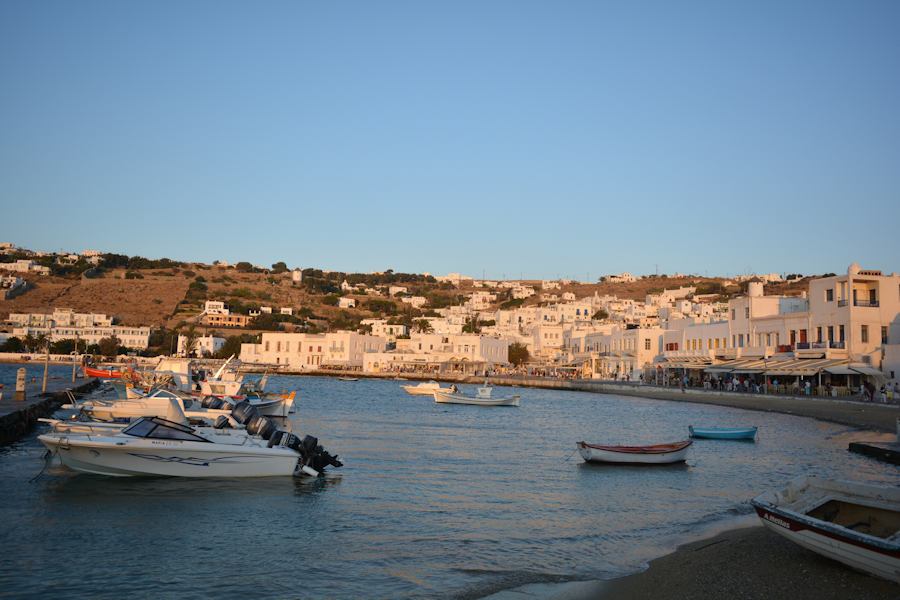 It wasn’t so easy to get up in the morning after having partied all day and rock n’ rolled all night, but I finally made it! So the next thing was to hop on a ferry and cross to Paros, the glamorous and distinguished island with the sandy beaches and amazing traditional architecture. I disembark in Paroikia Port.

This small town is colorful with its amazing little “sokakia” as the Greeks call the narrow alleys which are not accessible by cars, full of colors and shops. Just Google (or duckduckgo 🙂 ) “Paros alleys” to get an idea of their beauty.

After Paroikia I drove to Naoussa. Even though I love the freedom that motorbikes give me, I prefer the safety of a car and especially in these kinds of roads, with thousands of tourists driving cars, riding bikes and motorbikes. From time to time you may run into a donkey. In this picturesque sea village I found many nice taverns with rather tasty food, clubs, bars and its little romantic poet.

Again, a myriad of alleys were there for me to discover my way out and ask myself what I was going to be next. A walk by the sea side, a nice dinner or maybe some clubbing? I opted for all three of them and didn’t regret it!

I enjoyed Paros’ fun nightlife and swam in its crystal blue waters on the beaches of Kolimbithres, Santa Maria and Golden Beach. Water sports, such as windsurfing and water skiing, are popular among the locals as well as among the visitors. Actually, Paros for wind surfers is supposed to be a Paradise on earth.

That’s a perfect destination to go to after you’ve danced your shoes off in Mykonos and its wild nightlife in bars and dance clubs. And that’s exactly what I did. I needed to relax, to walk, to swim, take sun baths. You know. Simple, nice things. Siphnos turned out to be a quiet, easygoing island ideal for families or couples who are seeking to spend a romantic time together.

Here you can stay in the capital city of Apollonia or in one of the many beaches the Island has to offer like Platys Gialos. I chose the second one and was very happy for that, since everything was just in front of the beach. With its beautiful beaches to its impressive Cycladic architecture, Siphnos is a place to fall in love.

Its history goes back to the beginning of time, and its cuisine it’s well known all around Greece. In fact, a great chef, named Tselemendes, was born in here. His recipes are very famous and appreciated in Greece. His name, “tselemendes”, is today synonymous of cookbooks. 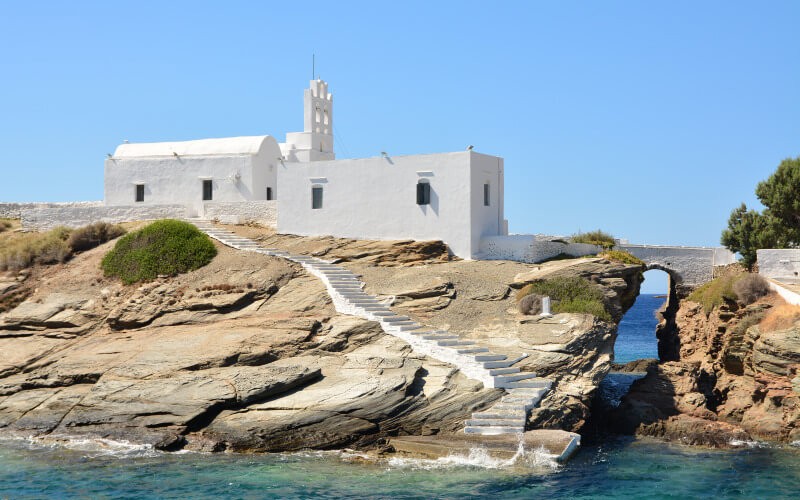 Sifnos Island, church by the sea

Siphnos is great for laid back, easy-going traditional Greek beach life. Kastro, a village in the island, is one of the most picturesque with its classical Cycladic architecture (narrow cobblestone streets, stone houses and taverns). Not to miss is the 17th century monastery of Panagia Chrysopigi, situated near by the sea with its open air baptismal font built just a few meters from the sea shore.

Close to Mykonos are located many other fabulous Cycladic Islands like Santorini, Milos, Amorgos, Ios, Folegandrosand more. It’s up to you, your time and budget to decide which are going to be Your Islands to discover. Mine was Mykonos, Paros and Siphnos.

Welcome to the Cyclades Islands!

the 14-day Magnificient Greece Tour or

discover great attractions in Greece. Check the unique Greek Islands Cultural Travel Guide Zeus Guide or see and extended version of “Best things to do in Greece” at What to do during your Greece Vacation 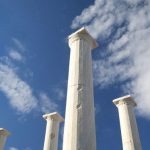 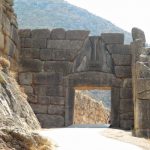