The Greek Island of Rhodes on Google Maps

With a perfect combination of history, natural beauty, and modern amenities, the Greek island of Rhodes should top your travel list. Rhodes is the largest of the Dodecanese, a Greek island group in the Aegean Sea. While planning your visit to the Greek Isles to enjoy the beauty of the Mediterranean, use this list of must-see places on the island of Rhodes as your go-to travel guide.

The Greek Island of Rhodes in the Dodecanese

Rhodes is the largest of the Dodecanese Islands. Its rich history involves many events. The union of the three ancient cities, being conquered during the Middle Ages by the Knights of the Order of the Hospitallers in 1309 AD, the conquest by the Turks and the expulsion of the Knights in 1522 AD –leading the Knights to Malta – being under the Italian domination in 1912 and finally the official restitution of Rhodes to mother Greece in 1948.

The island is extremely rich in architecture with various different elements. If castles and tales of knights are attractive to your ears then you’re on right Island!

I couldn’t resist, so I browsed some electronic and classic pages – made of good old cellulose- to learn something more about the dispute and the hostilities between the Knights of the Templar and the Knights Hospitallers. History is repeating constantly itself. One “brother” against the other.

The capital city of Rhodes Town

The historic surroundings and amazing architecture combined in the Old Town and the New Town help to create a romantic atmosphere that is perfect for a Greek holiday. As you wander the narrow paved streets gazing at picturesque fountains and beautiful stone arches, you will eventually find yourself on the legendary Street of the Knights.
Sights of the Middle Ages which are worth visiting in the medieval city of Rhodes include the Guest House of St. Catherine, the church of the Holy Trinity, the Virgin of the Castle and, of course, the Grand Master’s Palace which hosts the Museum of Rhodes.

Continuing through stone arches and breathtaking medieval architecture is sure to stop at the Palace of the Grand Master. This awe-inspiring Byzantine masterpiece was constructed in the 14th century and consists of 158 rooms, mosaic floors, and frescoes by celebrated artists.

You can’t help but admire and go back with your mind nine centuries. Iron-clad men, pirates, peasants, medieval notions and prejudices, gunpowder, swords, chain-mail, beautiful women throwing their hair from the balcony for their beloved one to help him climb, tall horses, fairy tales, and since I’ve already overdone it, why not maybe a winged dragon that spews fire!

For different reasons, I think that both the upper city (Collachio) and the lower city (Borgo) impress the visitor. Gothic towers and cobbled walks travel you to past ages. Do not visit Rhodes without your camera. Even if you’re fond of “I shoot with my eyes and live the experience without being consumed in the click-click of the camera” and in “is the shutter and the F stop right?” I’m sure you’ll shoot quite a few photos.

The medieval city of Rhodes (which has its place on the UNESCO World Heritage List) was built upon a part of an existing Hellenistic city underneath.

There were already a fortress that protected the inhabitants in the 7th century AD. During the 11th and 12th century the town walls were extended. At the advent of the Hospitallers the walls expanded even more and became 4 times longer. They were built to withstand war in which gunpowder was used. 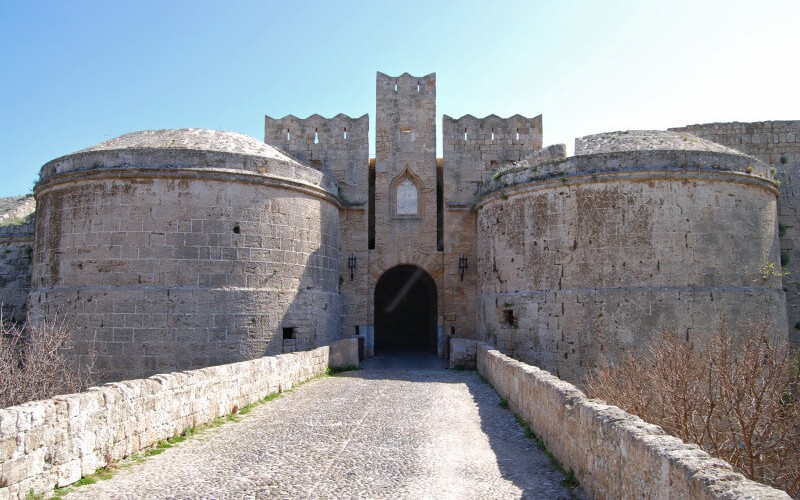 Around the Greek Island of Rhodes

As you move southeast on the island, enjoy the cosmopolitan beach community of Kallithea. Although this is the most densely populated municipality of the Greek Isles, a stop at the Springs of Kallithea is worth the trip. Inaugurated in 1929, these bathing facilities are known for therapeutic waters. This southern scenic spot is also a popular wedding destination each summer.

Continue south along the eastern coast of this breathtaking Greek isle to Lindos. This hilltop village is a modern expansion of the ancient town of Lindos, which is marked by the Acropolis. The original town was founded by the Dorians in the tenth century B.C.

While visiting the Acropolis, you will find the Temple of Athena Lindia and the Propylea of the Sanctuary. Take time to visit the newer village and admire the whitewashed houses and pebble paved courtyards. Then to the western coast of Rhodes you’ll find to the Valley of the Butterflies. This is perhaps the most beautiful part of the island with strolling footpaths, lush greenery, and flowing streams.

As the natural home to the Panaxia Quadripunctaria species of butterfly, the beauty of the black, white and red wings help to make this Greek island stop seem like a fairy tale.

Then there is the beautiful long, golden sand beach of Tsambika. After visiting the famous Tsambika Monastery, which is home to the Byzantine church dedicated to Our Lady, enjoy the many amenities of the well-developed beach community.

Rhodes is accessible both by air and sea. If you are not in a hurry, the sea is a nice option. To tour this island, I personally prefer a car. You have freedom of movement and as the island is large, a hired car is my choice.

If your time is limited and you do not want to stay long on the island, but don’t want to miss this Mediterranean gem, perhaps a cruise is the ideal solution for you. In this case I wish you a great cruise!

Find here information and deals on cruises in the Eastern Mediterranean and the Greek islands.

Want to know everything about the Greek Island of Rhodes? Check zeus guide, the Greek Cultural Travel Guide sponsored by Vikings Navita 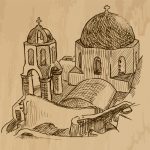 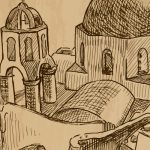